Diego Barizo Because some times, I just don't have anything better to do

RetroChallenge #3, part 9. Two for the price of one.

With just hours left in the Retrochallenge, I sat to add that 2nd “Chomper” to “Sup-Caz”.
Trying to keep the game as fast as possible, I thought that I could just draw the same “sprite” a second time, just switching the horizontal and vertical variables.
And it worked. I had to make a concession though.

The screen is 256×192. But, since I’m switching vertical and horizontal ones for the second Chomper, I can’t use the whole screen, since 240 can’t be used as a vertical coordinate. Therefore, I had to limit the screen to 192×192. This is not that bad, and leaves some empty space on the side if I ever want to have some kind of score display or whatever. 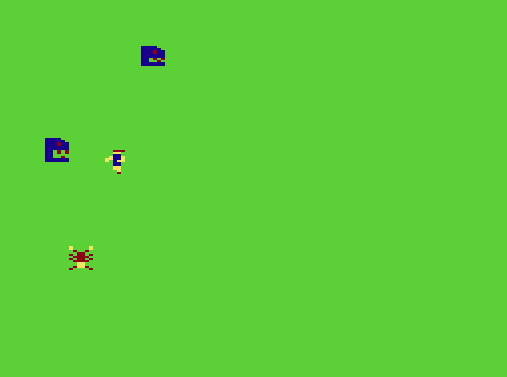 With this, the Remix was basically done.
I went ahead tweaking a few things. Like removing the timer used to end the game (it moved a single pixel, almost unnoticeable, across the screen) and just used the Chomper’s position as timer. Once it reaches the 14th line, the game is over.
Also made the show your score and pause whenever you catch a bug or are eaten, instead of only at the end of the game, and finally, if your score goes below 0 (you loose points when eaten by a Chomper), the game is over.
Of course, before calling it a day, I compacted the code the usual way, merging and renumbering lines, and removing spaces.
In the end, the game is not very challenging or fun the way it is. Just mildly entertaining, I would dare say.
But is probably the “ultimate” version of the original game.
If I ever decide to come back to this game, I will probably switch to the lower resolution (128×96), which will give me larger characters, and 4 screen pages. Then I could add some background with obstacles, some logic to the bug’s movement – like trying to stay away from the player or close to the Chompers, and an on-screen score display.
And again, I wonder why I didn’t do better back then. I guess I realized that the game was not that fun to play, and didn’t try too hard.
Here is the code for the original and Remix versions.
I guess this is it. I can say “Challenge #3, completed!”